What kind of skull is this? Spoiler Alert: It’s not a skull!

Home/Anatomy, Education/What kind of skull is this? Spoiler Alert: It’s not a skull!
Previous Next

What kind of skull is this? Spoiler Alert: It’s not a skull!

It’s pretty common for me to get questions about bone identification. If you find a weird looking skull or bone in the forest or on the beach, who better to ask than your local bone cleaner? I have seen a lot of them, after all. There is one type of bone that I get asked about a lot, often because people misidentify it as a skull or at least part of one, and it looks like this: 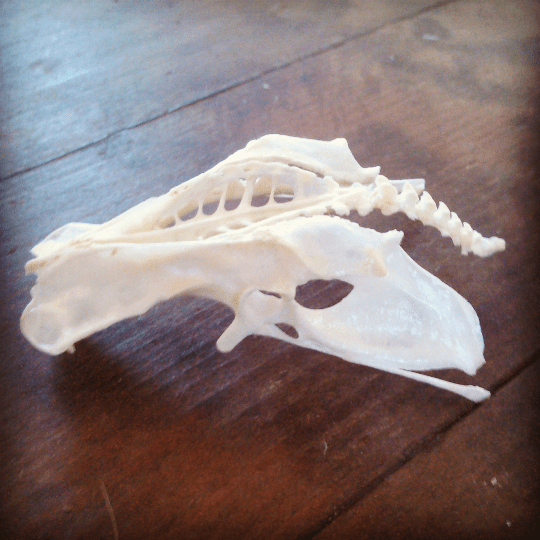 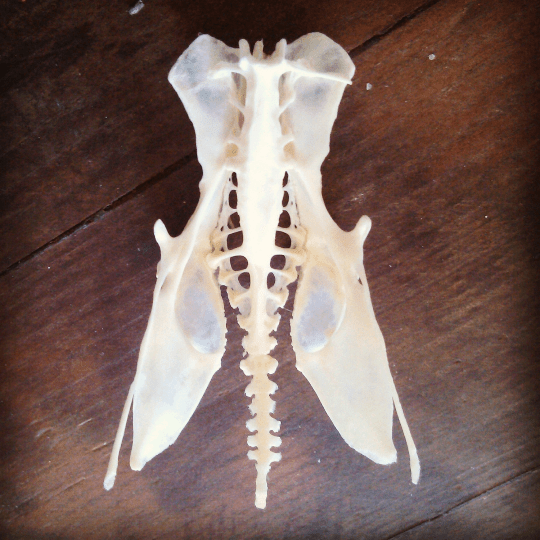 So what kind of skull is it? Well, it isn’t a skull at all. To be fair, the above photos show a more complete version of this part of anatomy than you’d likely find in the wild, and sometimes they can look very convincingly like they belong inside the head of a strange creature. It is actually a synsacrum, and if you find one you can be sure it came from a bird. To be technical, it’s a fusion of caudal vertebrae to form a more rigid structure. I’m no expert, but from what I understand this is a feature birds have held onto from their dinosaur ancestors, and provides structure and possibly reduces their weight by minimizing the need for muscles to hold individual vertebrae in place.

If you look closely at the photos above you’ll see that below the synsacrum there are a few free caudal vertebrae followed by a strange looking “tail” bone. That is the pygostyle, another unique avian adaptation. It’s oddly flat, and formed by the fusion of the very last of their vertebrae. If you’ve ever butchered birds, you’ve probably heard the term Pope’s nose (I’ve also heard parson’s nose) – that weird little butt bump is built upon the pygostyle. It’s where the tail feathers attach, and, while I was originally taught to remove it when butchering a bird, I’ve later come to accept it as a delicious little fatty nugget. The above synsacrum was from a bird of my own – I raised meat quail for many years, and every once in a while one would fail to thrive and pass away (a reality you accept when you are raising several hundred birds each year). I’d occasionally clean the skeleton if only just to try to get some answers, and found this crazy deformity of its synsacrum. Sad for the bird, but really interesting to see.

So hopefully now you’ll be able to identify a synsacrum if you come across one, and impress your friends with your avian anatomy knowledge.

There is a chance you could use a synsacrum to identify the species of the bird it came from, but that’s beyond my skill set. A word of caution if you find one in the wild – since they all come from birds, and almost all birds in the US are federally protected in a way that makes it unlawful to keep their parts, you’re best off to leave it be.